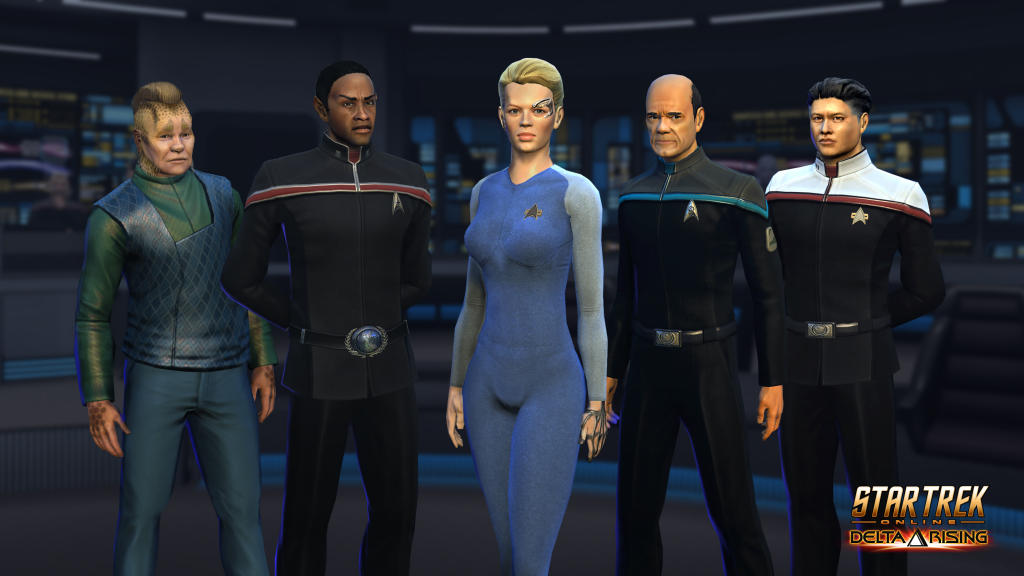 It is fair to say that Star Trek fans have been a little neglected with regards to video games of their favorite franchise over recent years, yet Star Trek Online has gone quite a way to changing that. Cryptic recently released their second expansion of that title called “Star Trek – Delta Rising” and the free to play MMO is definitely better for it.

Avid fans of Star Trek will probably be able to tell you straight away that this expansion pack has been molded on Star Trek: Voyager, the popular television series that was on our screens between 1995 and 2001. The same characters, alien species and the many familiar locations found in Voyager all here and even some of the voice acting has been done by the original actors from that series. Whilst the core principals of this expansion are very similar to that of the original, it would not be much of an expansion without there being something extra for us to enjoy, so let’s take a look at what Delta Rising brings to the table.

Of course, when any popular MMO releases a new expansion, the first question anyone will ask is “So what is new?”
Well first of all there is what many players have been calling out for and that is an increase in the level cap. The cap has gone up 10 levels, meaning that now players can rank as high as level 60 instead of just level 50. Additionally, the traits that can be earned between these levels are extremely valuable. On top of this, the ships that players use will also level up.

Another new aspect that has been introduced is that of specializations. These can be earned by your characters and can be used to improve either their space or ground capabilities. Other additions include a new PvE mission and a brand new adventure zone on the ground for players to enjoy. Unfortunately, again the big let down with this title is the graphics. We are again presented with some poor quality cut scenes where the voices do not correspond with the mouth movements and the animations are just badly done.
The NPC’s in the game seem to just shudder from time to time and they are forever getting in your way and blocking your path.

The flaws in the graphics are not the only turn-off that is still present from the original, there is still that lazy habit of extending missions through the laziest method possible. We all want lengthy missions but to make them longer through doing nothing more than sending in X number of additional waves of enemies is never going to cut it with fans. Star Trek – Delta Rising will always appeal to fans of the Star Trek franchise and this MMO has a great following but although many things have been done great with this expansion, the faults from the original are still there and have not been fixed at all.

The addition of voice acting from the original actors is excellent but it might have been worth spending that money on ironing out the graphical flaws instead. Despite its flaws though, the gameplay is good and there is plenty of content for avid fans that follows very closely along the storyline of Star Trek: Voyager.