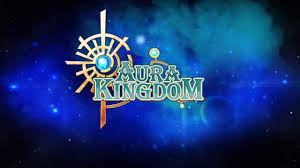 The latest free to play browser game to be published by Aeria Games is that of Aura Kingdom, an MMORPG that throws you into a fantasy world that is displayed via some very effective anime graphics. The game will have you battling other players, leveling up and working your way through skill trees as you experience somewhat of a different take on a genre that has been seen a lot over recent years.

Once you start up the game you are thrown right into a battle at the off, with you having to try and defeat the boss. Do not worry though as this task is actually very easy and more of a way to get you used to the game than anything else. This is the start of the storyline as well as a bit of a tutorial as your character then wakes up as if everything was a dream. One of the standout parts of this game are the sheer amount of classes you can choose from when you create your character, there are nine in total which is a lot for a game of this type. You can be anything from a gunslinger or ravager to that of a guardian or bard with each of them obviously offering their very own advantages and disadvantages.

Once you have selected the class that you wish to be, you can then customize your character through choice of hair and eye style and color and different facial features.

You can either move your character via point and click on the mouse or opt to use the standard W, S, A and D keys on your keyboard. Either way seems to work well and there should not be any issues with controlling your character at all. You will also have to use the number keys from 1-9 in order to use the abilities that your character has.

As with most MMORPG games that are available today, the gameplay initially involves getting quests and tasks from NPC’s and completing them for some experience and money. Movement and fighting seems to be very fluid in the game as you can both move and jump whilst you are attacking, making it a very interesting possibility for when you ever get to fight in PvP battles.

Whilst navigating the map is very slow at first, you soon get introduced to your first mount in the game, an ostrich that will make traversing that so much easier. There are a number of stats that you will have to try and increase through leveling up, some for attack and others for defense. You will have damage, critical chance and speed stats for your attacking prowess and HP, defense and evasion for your defensive abilities.

What makes this game a little different from others is that there are no skill tress but skill paths instead. These allow far more freedom in how you wish your character to develop and in which direction you wish him to go.

Aura Kingdom is actually a great little game to play and while it does not offer too many features that cannot be seen anywhere else, it seems to offer them in a very polished way. The game might not be as deep or complex as others but that only makes it a great place for newcomers to the genre to get to grips with it. • Good variety of classes.
• Not too much of a grind.
• Good artwork and smooth graphics.

• Just one race to speak of.
• Quests feel the same most of the time.